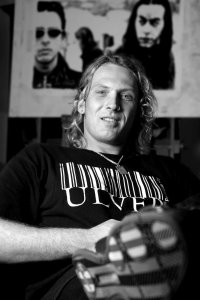 Born in 1973, Heath showed a passion and potential for the visual arts at a very early age. Always with pencil and paper, he drew through most of his childhood, and knew this was what he was supposed to do.

After finishing school, Heath’s life took a shift away from art slightly, but returned with full force in 1996 when he resumed studies at North Adelaide School of Art.

Having always drawn, naturally Heath planned to major in Drawing and Painting, with a little Jewellery on the side, which was something that he wanted to acquire at least basic skills in. Disillusioned with how his favoured media were being taught, he shifted his focus to that of jewellery, both it’s production and the philosophies behind it. Here Heath met possibly the most influential individual of his life.

For three years he studied under the watchful eye of his Mentor, Don Ellis. The banter between Heath and Don that accompanied the learning definitely had an effect on the philosophies of Heath, and the wealth of wisdom that Don imparted upon Heath could not ever be repaid.

A student of distinction, Heath was hired to create jewellery for the movie Sample People including pieces to be worn by Kylie Minogue.

Departing from NASA, Heath had no way to continue down the jewellery path, so all he had to make his way as an artist was the one thing he took with him from Drawing 1A, that you can use charcoal to draw with. To really draw with. And his day job.

The opportunity to give away the day job arose on his 17th anniversary with one employer, so he took it and left.

One year later, Heath had built his own studio, and with much love and support, the creation of Burnt Wood Studio was a reality.

Heath’s philosophies for his work are, that the creation of art is meant to be the creation of a thing of beauty. He strives to bring every image to life, and give the viewer something worth looking at.

Contemporary art is a thing of the past, and the past is now the present. A new renaissance is at hand, where man will learn that only what he makes matter can matter to him, and that ultimately nothing matters. With this, man must ensure that he does two things: That he understand that his actions do affect the space surrounding him, so they must be taken into consideration. And that nothing but the best should be tolerated, for there is no need for less.

Heath sees his role as one of a documentor, to capture the world around him and all that is noteworthy within it. Charcoal offers the opportunity to work as primally as early man, creating work to be enjoyed by an extremely modern man.