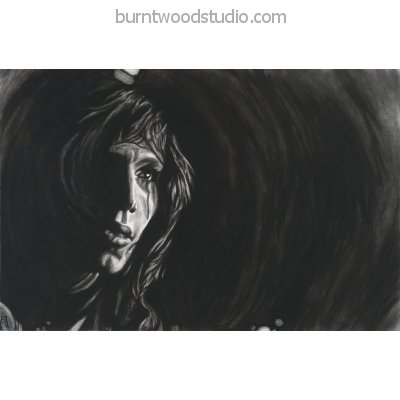 This was the first image that I found, that I felt was a really strong image of Roger. I was doing a portrait (or three), to see if we could get backstage to get them (or it) signed, thus enabling Kylie to meet him. I knew that I would do this piece, even if it was after the gig, as I knew it would make a really nice drawing.

I don't really know if it looks like Roger Waters or not, but people tell me that it does, so that will have to be good enough for me. Unfortunately, the works were not viewed by Roger, so I don't know what he thinks. I always like to know what the subjects of my work think of them. So far the feedback has been very encouraging, but I don't know with this one. I really like it, and the Fidgetable likes it best of the three. So I am still glad I drew it.