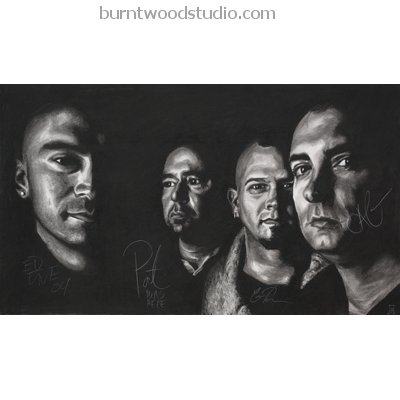 Well there's quite the story to this one, but here goes anyway.

I had drawn a portrait of Ed for Kylie for her birthday in 2002, +Live+ are one of Kylie's favourite bands. So when +Live+ were touring in 2004, they were playing at Thebarton Theatre, and Kylie's work had just hosted a trade fair there, and Kylie got to know the Manager through that, so she suggested that I draw a portrait of the entire band, and see if we could wangle it to somehow get it signed.

So with four days to do it in, with three 8 hour shifts at work, and a family Christmas barbeque the day of the concert thrown in, this was a hard ask, but I got it finished (obviously) and we organised to leave it in the Manager's office, and she would see what she could do, but nothing was for sure. We had the original framed Ed portrait, and at that time, my entire collection of charcoal drawings, so I was only worried that I would not see them again, anything else was gravy.

To cut it short, she showed the Australian tour promoter, who showed the American tour manager, who in turn showed the band. They all were gracious enough to sign the group portrait, and Ed signed the one of him. They all loved the drawings, and Ed asked me if I could draw a copy of the original portrait for his purchase. He left me with his manager's details, and thus ended a crazy, fantastic night.