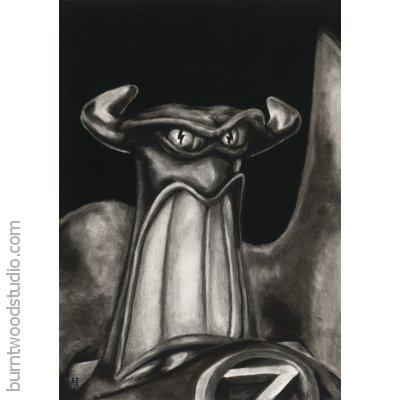 Well now, as we know The Evil Emperor Zurg is Buzz Lightyear's arch nemesis, not to mention his father!! Now Zurg has always appealed to me personally more than Buzz, so when the time came to draw the accompanying piece for Devin's room, I was all guns blazing, as I had waited a long time to get to draw Zurg. I did not really have any good pictures of Zurg to base this on, as none of them reflected the feel of the action figure that I had, so I used the action figure, which I had passed on to Dev.

Not a still life as such, but I used the figure more for seeing how shadows fall, and as a basic guide, but I knew how I wanted him to look. I had finished the piece, (well, I thought so), but Kylie and Devin thought the eyes needed something else, and their collaborative minds came up with the idea of cat's eyes, but with lightning bolts for pupils. A great idea, but the most difficult and risky of all the ideas they had, but I had to admit that it would look good.

It was difficult to edit something that I thought finished, particularly as if I stuffed it up, I would never be able to return it to how it was, but I needed to get it finished to drop off at Grant's as quickly as possible, so I had to just do it. Luckily I didn't stuff it up and as it stands it is one of my favourite works.