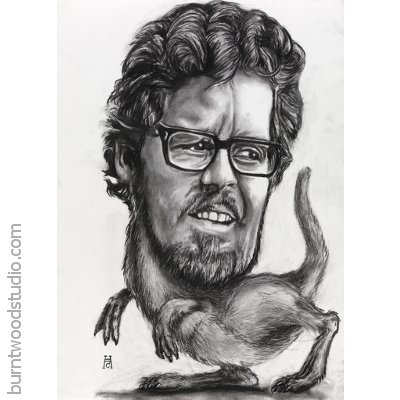 Rolf Harris has long been a huge inspiration to me. His love of life is unparalleled, and his ability to entertain cannot be denied.

Rolf is the epitome of the term ‘all rounder’, and is a true gentleman and professional.

My love of Rolf began as a child, and has grown as I have. I can't explain why I enjoy Rolf Harris' music so much, as it cannot be compared to anything else I would listen to, but I do enjoy it, and I can only reason that this is because of the man who is behind it.

Rolf as a cartoonist and as an artist is where my main admiration lies. I love the way that he paints, with those massive brush strokes, to reveal a fantastic image without the viewer even seeing it coming. His finer paintings are truly wonderful, and I don't think enough people realise just what this man is capable of beyond the wobble board. The Rolfaroo was a little character that Rolf used quite frequently, including often displayed on the previously mentioned wobble board.

When I started this piece, I wanted originally to draw it as simply, quickly and freely as I possibly could, to try to draw the subject, as I would see him draw. It started out very much in this manner, and it was a very free flowing process, but the old habits reappeared at some point, and the end result was a lot more polished than I had intended it to be. This is why this is a beta test, and may be reattempted at a later date.

If I get around to it.