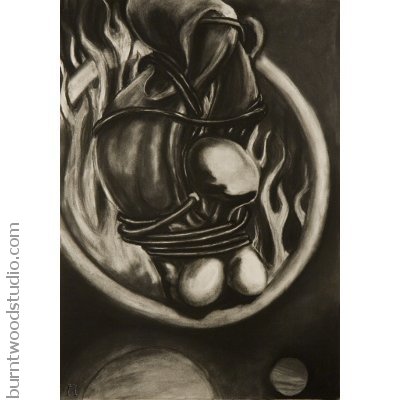 The origins of this piece begin with Third year jewellery studies under the masterful watch of Dr Don Ellis. I had sketched out plans for a goblet, the base of which was to be cast in bronze, with a hand-smithed silver cup.

The problem was that the stem was too delicate to stand the summer heat, and the whole thing kept falling over. The piece was to be of a stylised angel, with flowing robes that hit the ground, then floated up to greet the wings, which reached up to hold the receptacle.

I liked the head region of what I had made of wax, so I cast that in bronze, so at least not all was lost. Once polished, I bound the piece in leather cord, but it was too big and heavy to be worn as a pendant, (and it wouldn't sit straight), so I simply tied off the leather cord, and the piece became a ‘holdable’. A holdable is a piece of jewellery that's main function is to be held, rather than worn, don't get me started here.

This was done as a bit of a test piece for filming myself draw. It was the first complete piece captured, and my first attempt at any form of video editing with an old version of windows movie maker. It's not the best but you can see it in my video gallery.

This entire image was drawn to the music of The Project Hate MCMXCIX, a band you should definitely have a listen to, if you like that sort of stuff, absolutely beautiful.