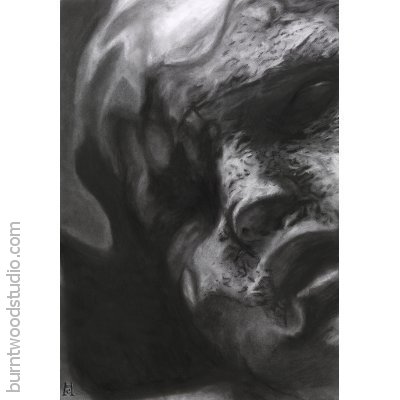 This was a piece that I originally tried to complete for the Evoke group exhibition, a fundraising event for the Royal Society for the Blind, in October 2008.

This whole series that I wanted to do for this event was put on hold as a result of my severely injuring my leg, leaving me unable to put any pressure on my right leg at all.

I completed the work earlier in the year for the Show seated, with my leg propped up on an ironing board, but this piece was too large to make that a possibility, so I had to attempt to draw it standing with my crutches. I filmed this evening out of curiosity, and the resulting vision can be seen in the video gallery.

I could not work like this again, as it was far too painful and dangerous to attempt, for I could not risk any further permanent damage to my knee.

After surgery, much physio and exercise, my knee is almost as good as it ever has been, and the Cherubim piece has finally been completed.