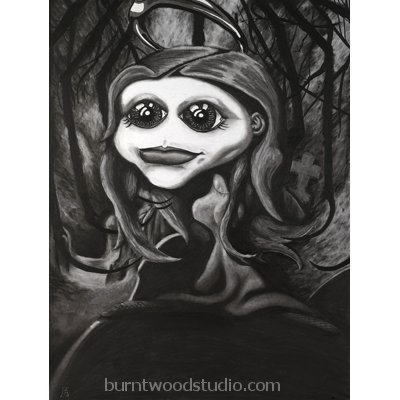 An Experiment In Noselessness Mk I

One of the first charcoal pieces that I drew, I was trying out stuff, and I wanted to do a drawing based on this thing a childhood friend once showed me, that he would do with his mother's magazines. He would take pictures, say from a cosmetics ad or a photo of a celebrity, and fold the down in the manner of a MAD Magazine fold-in, such that their nose was removed, and the jawline matched as well as could be expected, with the eyes situated slightly above the mouth. I thought at that time (about 10) that it looked cool, and I laughed my ass off at it a lot.

So I decided to draw one made up this weird little angel. I also experimented with blocked out space next to a textured background with this one. This piece reminds me of where I began, and is the start of my measuring stick that I use to judge how I have progressed.

Tony, you are a tripper for showing me this. Cheers.