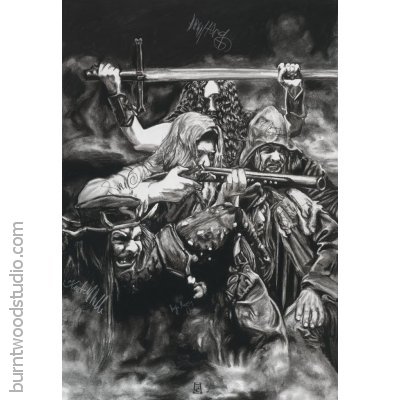 Definitely a highlight for me so far, this one is another that was completed in the nick of time. I originally wanted to get this finished and photographed before the Arcturus concert at the Enigma bar, in case something happened and the piece was damaged, or if I was fortunate enough to get it signed, the prints would be unsigned and in the piece's original form.

This was not the case, and I only finished it hours before the concert, so I had to chance it, and I took it along to see what might happen. The show was awesome, and after, Sverd remained on stage, so we took the piece to him to see if he could sign it, and whether or not he might assist with the rest of the band signing it. There was a bit of a communication issue, but he signed it and showed us where to go to take it to Jan. Security however rathered us not to be on the stage, so we waited until Jan was going backstage, when Kylie called out and caught his attention. Seeing the piece, he took us aside to sign it. Knut was passing by, and he was signing it when Tore came passed, and when he saw it, he invited us backstage, where he, Hugh and Simen all signed the piece.

They were all very positive about the work, and they were genuinely nice guys, who were more than happy to have a chat and spare us some of their time. I gave Knut some of Adelaide's finest, hopefully giving him something else to remember Adelaide by.

Unfortunately, Arcturus disbanded immediately upon completion of their Australian tour. Hopefully we helped them end on a high. I know they helped raise me to a new one.

I would like to wish them all the best with their future projects, and look forward to meeting them all again.