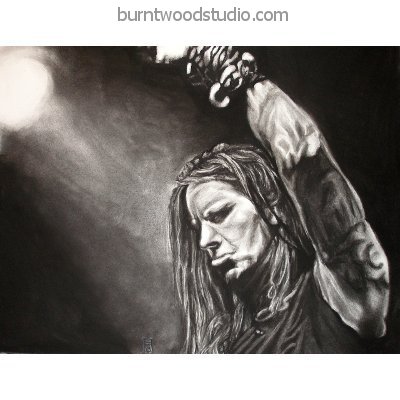 This was drawn the night after my exhibition opening at the Dragonfly bar during the SALA Festival in 2007. Mr Anselmo was in Adelaide touring with one of his bands, Down, and he was staying about 100 metres from the Dragonfly, so I popped up to meet with him.

He was kind enough to want to have a chat, and I was lucky enough that one of the Sunday Mail's photographers was on hand, and obliged me in taking a photo with Phil. I found him to be an extremely down to earth man, who was more than happy to share his time, and keep his entourage waiting.

So I drew this the next night, as they were playing the following night at the Thebarton Theatre, and I thought I might be able to get him to sign it, but unfortunately, I did not complete the piece in time, and I was not about to present him with an incomplete work, so I did not go, and there is no more story to tell.