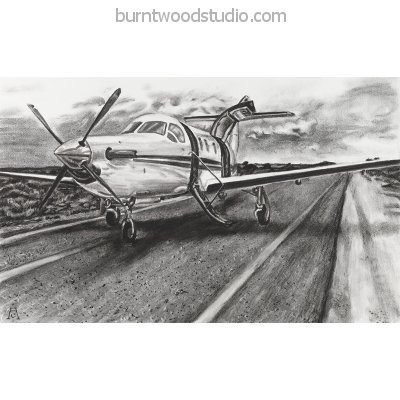 The Royal Flying Doctor, Wherever, Australia

The bloke who commissioned this series originally asked that one of the pictures be of the Flying Doctor plane. We didn't actually get to see the plane while we were out there, so I had to find an image. There originally was other stuff happening in this picture, but I left it out, because I wanted to really give the feel of the middle of nowhere.

I have never attempted anything mechanical in charcoal before, so there were a lot of firsts with this series. There is a real speciality of artist who paint planes with startling accuracy, so I knew it wasn't going to be the best image of a plane ever done, but in the end I am happy with the end result.