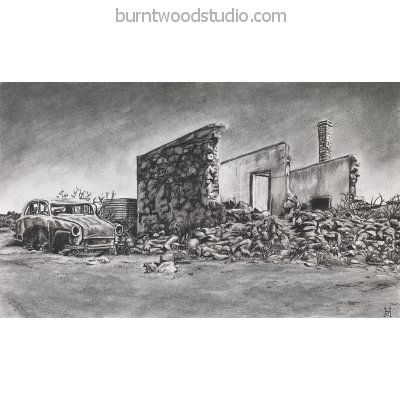 This photo I took hanging out of the car as we drove past this ruin. Obviously an old farmhouse that nature has had it's way with, with a car parked alongside that has suffered the same fate.

This is in the middle of Silverton, and will probably be cleared for someone else to build on if they choose to live out there, but I felt that it was a beautiful testimony to the harshness of the country in which we live.

I was actually really proud of the photo that I took, and would have been happy to display that as a finished piece, but unfortunately for me it doesn't get to be that easy, as I do not consider myself a photographer, and therefore I had to translate the image as best I could into charcoal to be a part of the Broken Hill Series.

I was getting sick of drawing rocks by the end of this , after completing the Monoliths and Monument pieces, but I was quite happy with the outcome of this piece, so much so, that I entered it into the drawing category of the Royal Adelaide Show in 2008.